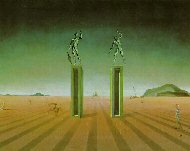 Ronald David Laing was a controversial psychiatrist, often associated with the anti-psychiatrist movement. He combined existential philosophy with psychiatry, giving new perspectives on the nature of mental illness.

In his most-known book, The Divided Self, he describes the schizoid person in these terms.

The schizoid individual exists under the black sun, the evil eye, of his own scrutiny…The “self-conscious” person is caught in a dilemma. He may need to be seen and recognized, in order to maintain his sense of realness and identity. Yet, at the same time, the other represents a threat to his identity and reality…He is, therefore, driven compulsively to seek company, but never allows himself to “be himself” in the presence of anyone else…The self is related primarily to objects of his own fantasies. Being much a self-in-fantasy, it becomes eventually volatilized. In its dread of facing the commitment to the objective element, it sought to preserve its identity; but, no longer anchored to fact, to the conditioned and definitive, it comes to be in danger of losing what it was seeking above all to safeguard. Losing the conditioned, it loses its identity; losing reality, it loses its possibility of exercising freedom of choice in the world (Ronald David Laing, The Divided Self, London: Tavistock Publications, 1959).

Laing thought as well that our inner lives and feelings come mainly from our sense of connection with others and from the knowledge that others have about us. Without this, we suffer from an existential insecurity.

In Laing’s words, I can recognize the attitude of another kind of schizoid: the heavy Internet user, who needs to be connected and seen, through social networks and messaging systems, but up to a certain point, at a safe distance. His profile itself and the people he is connected to are mostly objects of his projections. He will introduce himself in order to be seen by others in a likable and acceptable way.

This world of chats, forums, blogs, social networking sites, supports his identity in a very fragile way. Being aware, consciously or unconsciously, of the unreality of that world, he clings to it in fear of losing it. Even his more material possessions (money) are just numbers in an online bank, which can be accessed by a few codes.

The Net and our presence in it have become our basis for constantly extending life activities. On the work level, the communication takes place mainly on the Net; on the creative level (graphics, writing, music), it is almost impossible to make it without technical devices; on the level of personal connections, the communication takes place more and more on the Internet. Therefore, we circumscribe our identities and personal lives, sometimes even sentimental, professional, creative, and financial, in a way mediated by electronic tools and kept by hard disks. The digitalization of reality is applied to every human activity.

One lives predominantly inside one’s own mind, so that the offline reality seems slower, more boring and less subject to our control through a simple click of a mouse. Online, there is only a distance of a click from a desire to its satisfaction.

Our identification with the activity on the Net resembles being identified with the ego. They are both constructions of the mind; both without proper substance and we are dismayed at the idea of losing them.
If our identities are created and maintained mainly in the computer and on the sites, the fear of losing everything is real. A breakdown of a hard disk in the absence of a backup, a virus subtly destroying our data, somebody who appropriates our online identity, are equivalent to a life catastrophe. The magnetic supports themselves last only a few years, and all data accumulated in our digital lives gets transferred to new supports as they change (magnetic tapes, floppy disks of different formats, hard disks, solid state disks, and so on). All this gives the impression of being temporary and fragile.

Alexander Lowen classified people according to the bioenergetic psychological characters. The typology that most closely approaches the attitude described by Laing and who mainly lives online, is the so-called schizoid character. This type of bioenergetics personality tends to reduce the contact with his own body, to live a life essentially on the mental level, to separate thoughts from emotions, to detach from direct contact with people. The schizoid personality is one of the most ancient, formed by emotional deprivations going as far back as the first year or the first months of life, and it is rather common in the advanced capitalist societies where the working rhythms deprive children from the body and emotional contact needed for adequate psychophysical development.

The separation in the first months of life and the construction of a schizoid character which withdraws from the world is compatible with the “single” life where every need is individual, not collective or social, where absolute independence is encouraged.

The schizoid character is not the only one which presents characteristics compatible with a relationship with the world in a “mediated” manner. Luciano Marchino, in the Italian magazine Cyber of January 1993, deals with the psychopathic character in the bioenergetic model of Alexander Lowen.

Often, when the relationship of a couple does not work, a seductive relationship with the parent of the opposite sex makes a child challenge the parent of his own sex, losing the latter’s support…In order to satisfy the seductive parent and, therefore, to not lose his approval, the “manipulated child” consequently will have to delude himself and the parent to match this task, and at the same time to modulate his own propensity to contact and to an emotional involvement in a way that would not let him be overpowered. This will make him an adult incapable of real contact and emotional participation. He will be imprisoned in his own mind, and the people and the world around him will be nothing more than just images, that he will be able to delete or betray without any scruples because nothing really exists for him.

The so-called generation “Y,” which is most present on the Web, born after 1980, have suffered the highest percentage of divorces between parents. As an inevitable consequence, the number of “manipulated children” has increased, who live with only one parent, often with the mother, with whom the child has of necessity to ally in order to not lose support. Often, a phenomenon happens which is defined as the substitution of the partner, when the emotions and excessive expectations are projected on the child, and which the child is not able to cope with.

The Internet culture is becoming more and more a culture of images and moving images (video). People in social networks and on dating sites have mental constructions which can be manipulated by their creators – and even more by those who interact with them, through their inner projections and fantasies.

In social networks and chats, people come and go, “friends” are created by just a single click and with the same ease they are deleted or ignored. Between people, mostly there is no connection which is rooted in direct contact: through sensuality, through sacrifice or sweat. They are almost only images present in a mental space. These instruments can connect people, but they cannot give the sense of an authentic community.

The attitude of the psychopathic bioenergetics character can be seen in a radicalized way in the pervasive presence of pornography, where the emotional disconnectedness is evident from radicalization of the sex act and from considering the actors as objects.

Coming back to Laing, as a psychiatrist, he was concerned about mental health and the construction of a healthy personality or ego, which the schizoid type can’t build, living primarily in his fantasy world lacking a real connection with others and even with his own body. However, in a broader spiritual perspective, there are other steps. The sense of being ourselves through other people’s eyes and feedback is necessary for the stages of ego construction. Eventually, those object relations have to be abandoned in order for the psyche to find support by a deeper part of ourselves, based not on other people anymore, but on our authentic human qualities.

These qualities manifest in us more and more as our self-awareness is developed. Knowing ourselves will become our source of action, acceptance and support. These qualities will never be lost because they are real: we can lose only what is illusory, so we cling to it in the absence of authentic ones.

Anyway, stages can’t be bypassed and the need to build of an ego personality, though “fake”, is required to go beyond it. For instance, a withdrawn schizoid personality doesn’t get the connection to people needed for mirroring into others, recognizing himself and growing his awareness, while a psychopathic character lacks the empathy to be mirrored into others.